See and try our extensive selection of height-adjustable sit-stand desks from the best manufacturers, with the best warranties available.

We stock bases in White, Silver & Black – Table & Desk Tops are stocked in several colors to choose from, Custom sizes and colors are made to order.

Scroll Down For Video.

The benefits of a height-adjustable sit-stand desk

Sitting too much is incredibly bad for your health.

People who sit a lot every day have an increased risk of diabetes, heart disease, and early death, according to the National Institute for Health Canada.

A significant problem for home & office workers, because they sit down for most of the day. Fortunately, standing desks are becoming increasingly more popular.

What Is a Standing Desk, you ask?

A standing desk, also called a sit-stand desk, is a desk that allows you to stand up comfortably while working.

Many modern versions are electrically adjustable so that you can change the height of the desk and alternate between sitting and standing.

They are referred to as height-adjustable desks or sit-stand desks.

Although research is still in the early stages, it does appear that using a standing desk can have impressive benefits for health. It may also increase productivity.

At the very least, using this type of desk can partly negate the harmful effects of sitting too much.

1. Standing Lowers Your Risk of Weight Gain and Obesity.

Weight gain is ultimately caused by taking in more calories than you burn.

Conversely, burning more calories than you take in results in weight loss.

While exercise is the most effective way to burn calories quickly, only choosing to stand instead of sitting can also be beneficial.

When compared to an afternoon of sedentary work, an equal amount of time spent standing has been shown to burn over 170 additional calories.

That’s almost 1000 extra calories burned each week from simply standing at your desk each afternoon.

This caloric difference could be one of the reasons why sitting longer may be linked to obesity and metabolic disease.

2. Standing May Lower Your Risk of Heart Disease.

The idea that standing was better for heart health goes back to 1953.

A study found that bus conductors who stood all day had half the risk of heart disease-related deaths as their colleagues in the driver’s seats.

Since then, scientists have developed a much greater understanding of the effects of sitting on heart health, with prolonged sedentary time thought to increase the risk of heart disease by up to 147%.

It is so harmful that even an hour of intense exercise may not make up for the adverse effects of an entire day spent sitting.

There is no doubt that spending more time on your feet is beneficial for heart health.

It is widely accepted that the more time you spend sitting, the greater your risk of developing heart disease.

Back pain is one of the most common complaints of office workers who sit all day.

Standing desks could improve this; several studies were done on employees with long-term back pain.

Participants have reported up to a 32% improvement in lower back pain after several weeks of using standing desks.

Another study published by the CDC found that the use of a sit-stand desk reduced upper back and neck pain by 54% after just four weeks.

Additionally, removal of the sit-stand desks reversed some of those improvements within two weeks.

Reducing sedentary time can improve physical, metabolic, and even mental health. Sitting less and standing more is such a significant lifestyle change.

If you want to try this out, then come and try one out at Impact Office Furnishings, Vancouver’s largest Sit-Stand Showroom!

If you plan to start using a standing desk, We recommended you split your time 50-50 between standing and sitting.

I have personally been using a Sit Stand Desk for over five years, and I like it so much I now have one in my home office also. 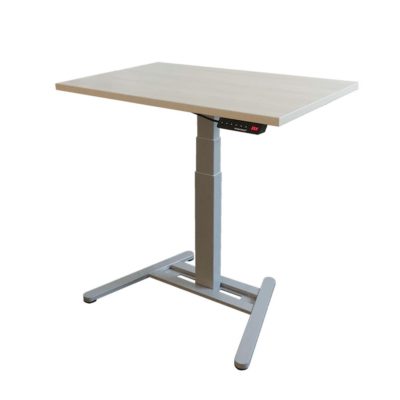